How do I find a chess club near me? This is a question that is often asked at trade fairs, on our chess tour or at regional sports festivals and other events. The answer is: At schach.in/Görlitz or schach.in/Flensburg. Simply enter schach.in + the name of the place and the clubs will be displayed.

Or you search via the post code: schach.in/28 for the whole area with 28 in front, or the full code schach.in/52070 to find clubs within 15 kilometers of the postcode. Or as a combination of several postcode areas: schach.in/78+79.

Where does the data come from?

Each club can change its own data: venue(s), description of the activities and weekly or monthly appointments. You can do this without registering, then it can take a few days until we have checked the changes and activated them. With a login, everyone can change the data of their own club directly, it can be found online immediately. 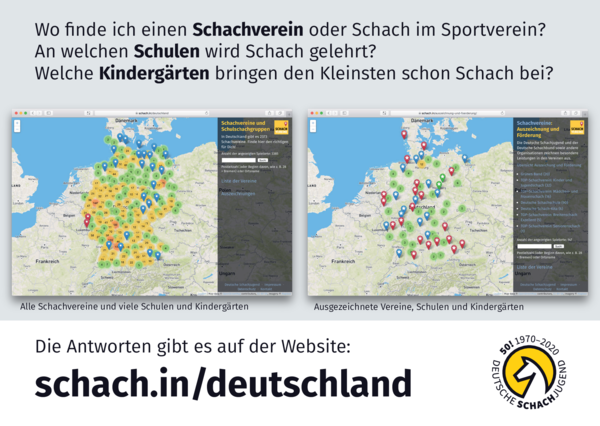 Originally the club database schach.in ran on a node.js server, the data came from the MySQL database of the German Chess Youth. In order to get a direct connection of the data including the possibility to change them directly, everything now runs in the Zugzwang Project-Content Management System, which also is in use for the event and tournament calendar and the administration of the German Youth Chess Championships. This system is based on PHP as scripting language, MySQL as the database and an Apache web server.

The map is displayed using the free JavaScript library leaflet.js with a self-designed map from the commercial provider MapBox based on OpenStreetMap data.

2285 clubs and numerous schools as well as individual chess kindergartens are currently in the database. Over 98% of the clubs are registered with their venue.

We are happy to answer further questions using the contact form.